Recently we were lucky enough to be invited to the NFL’s Family fun day in London, I had just got a drink and marshmallow treat for N when we arrived. After a few minutes of queuing we were told to no food or drink was allowed in so he had to drink as much as possible (as did I). It was like going through airport security, checking of bags and scanning with the magic wands and then we were in a shop of NFL goodies but this is not where the fun was to be had. To the left there was a door and stairs leading you down into the event hall.

One of the biggest things I love about American football, is there isn’t the same issues as football (soccer) fans of all teams were here and they were happy to talk to other fans there just isn’t the rivalry like you see at football matches.

So downstairs the first thing we came across was a craft bench where N sat down and made a football out of card and used tissue paper and colouring pens to decorate it. 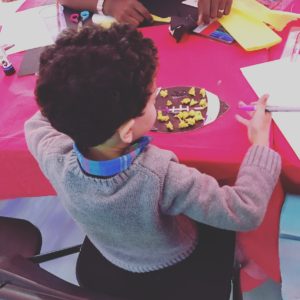 After decorating his football N had to try on the shoulder guards, jersey and helmet for the Washington Redskins. 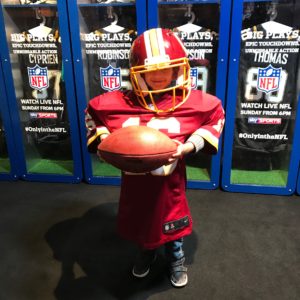 There were lots to do for all ages, around a corner there was an area to test out your quarterback skills, talks about nutrition in sports and cheerleading demonstrations.

All around the room there were signed helmets from several different teams. We had great fun finding the team we support and also the teams we have seen play. There were also  all of the Super Bowl rings, it was interesting seeing how the rings design have changes throughout the years. 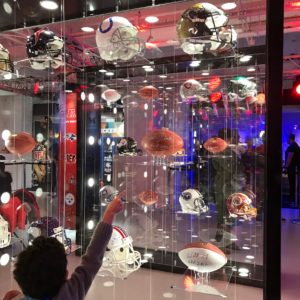 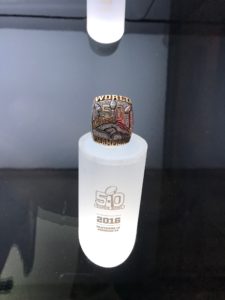