N is a bit of a Lush fan, recently we’ve spent more time in the Oxford Street branch. There are three levels of loveliness at their flagship store. As always Lush employees are ever so helpful, and also seem to take a shine to N. Due to this N had a long conversation with one employee who he told he was a Harry Potter fan (she also happened to be a fan as well) so she took N to see the Harry Potter inspired bath products. 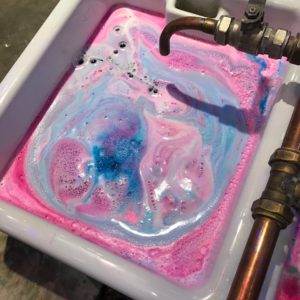 N had to try out the Dragons Egg in their special butler sinks which are situated in the middle of the bath bomb section. We didn’t have to wait too long for one to come free and N spent the entire time watching and enjoying the fizzing of the Dragons Egg. After trying the bath bomb we then went to look at Divination which is a bubble bar, you just wave it about in your running bath and it turns your bath purple with lots of bubbles.

Then there was the cloak of invisibility, which is a bath oil which adds oil to your bath making it far more moisturising. N was the least interested in this one, which is a shame as it is the one I would have liked to try.