At N’s nursery they were taught French as well as the normal things expected at nursery, I really enjoyed hearing Nate come home and speaking French (with his awful French accent). He was able to get by in asking for hot chocolate and other simple things when we have visited France however, since starting school where they have not continued to teach French he has seemingly forgotten it all. I have always wanted N to learn another language while he is young as I struggled with picking it up at 11 and only really got to very basic level and not much more. 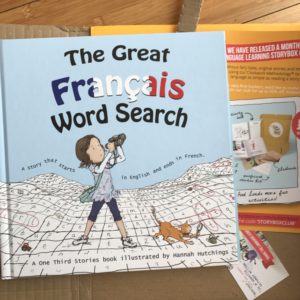 In the package there is your book, a fun booklet and some flash cards. Inside the book is a QR code and URL for you to download your audiobook. 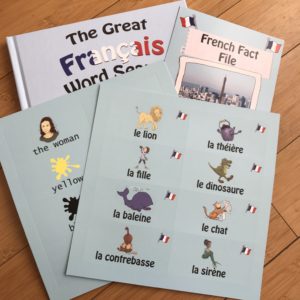 The flash cards were a hit in this house, the first thing after opening the package was to split the flash cards and sit and read them. This was the only slight flaw as it meant that N wasn’t necessarily getting the pronunciation quite right as he was reading them with English Phonics knowledge. 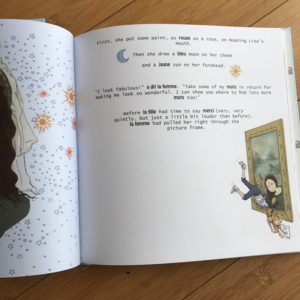 Once we’d had a little fun with the flash cards and I’d downloaded the audiobook, we opened the book up and loved the illustrations inside. The story inside is crazy but it has been written with the ideas supplied by children so it’s not surprising that the story is a little crazy. It kept N totally engaged and he has happily read/listened to the book several times in the last few weeks and has in fact asked to have the audiobook to listen to go to sleep to.

I really liked the idea and I really love the reality, the book well illustrated and the audiobook is lovely and soothing to listen to. It’s something we would be very happy to subscribe to.