Recently N has had his birthday party at Kidzania. We have visited Kidzania before (read our blog post here) and thought it’d be a great place to have a party.

The children loved the party, they didn’t stop at all constantly finding things to do and they were having lots of interesting conversations. I really enjoyed taking other children in and seeing how they viewed the mini city. N as the party boy was given more Kidzos (the currency in Kidzania), he was given 100 and the guests were given 50. I understand why but I felt this changed the dynamic, N had been before and had a Pazzport which meant he not only started with more money but also earned more money and activities cost him less money. Some of his friends who’d never been before were very careful with money and wanted to do activities that would mean earning money instead of spending money but N was happy to spend. 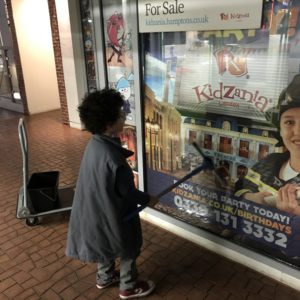 There were some things that disappointed me a bit like the fact you now pay cash for the Gourmet Burger Kitchen activity. Then the inflexibility of the party package, as we were in Kidzania which is all about doing things for yourself and working. I really wanted the children to make their own burgers and then go to the party room to eat them but this was not possible within the party package. Then the food choices which were limited, chicken burgers or pizza with all children having the same. We had a vegetarian child so that meant all children had to have pizza which isn’t great if you have a child with allergies or intolerances.

Despite minor issues the children loved the party and all of the parents have said how their children have not stopped talking about the party and how much fun they had in Kidzania.

Note: It’s worth looking at the activities on line as they have changed since our visit a month ago. For example the smoothie activity has gone.